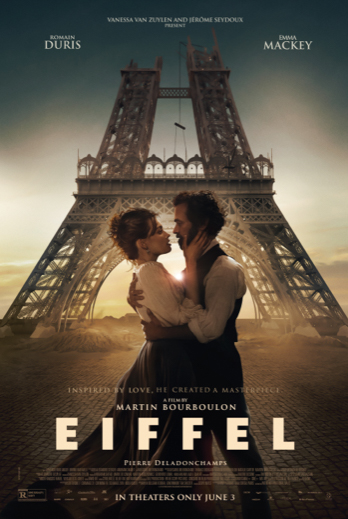 FANBOLT: 9 NEW MOVIES THIS WEEK, INCLUDING ‘CRIMES OF THE FUTURE,’ ‘HOLLYWOOD STARGIRL,’ AND MORE!

Summary: Eiffel is about Gustave Eiffel (Romain Duris), the man who, inspired by a doomed love affair with Adrienne Bourges (Emma Mackey), built one of the world’s greatest architectural wonders, the Eiffel Tower in Pairs in 1889.

What to Watch For: Screenwriter Caroline Bongrand pitched the idea to a studio about the building of the tower with a forbidden love thrown in before she knew the story of Eiffel and his tower. It turned out that the love story was real.

Word on the Street: The film was first pitched in 1997 and has gone through the hands of many directors, including Luc Besson and Tony Scott, before landing in director Martin Bourboulon’s lap.

My Take: Next up for filmmaker Martin Bourboulon is a Three Musketeers series of films."