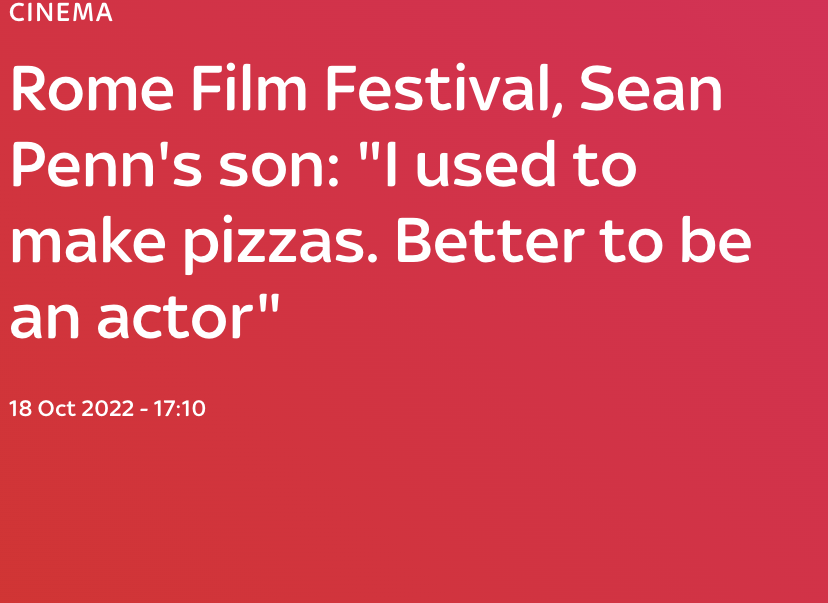 "The young actor, star of Signs of Love, spoke to present the film to Alice in the city: "I didn't want to follow in the footsteps of my parents, then I saw the salary at the end of the month and I changed my mind"

For some, acting and acting is a vocation. For someone else, however, no. But when the opportunity for a very high-paying job comes, it's hard to say no. To confess that he never wanted to make films is none other than Hopper Penn, son of Sean Penn and Robin Wright, who spoke at the Rome Film Festival to present Clarence Fuller's Signs of Love to Alice in the city. "I had no intention of being an actor like my mother and father, so I started making pizzas - said the actor - Then, after seeing the salary at the end of the month, I changed my mind. lucky to do what I like without having the success of my parents, so no one will compare, ”he added.

SONS OF ART ON THE SET

In the film he presents in Rome, Hopper stars alongside his sister Dylan and another daughter of art, Zoe Sidel, born from the union between Rosanna Arquette and John Sidel, who in the same film plays alongside her mother. "It is a privilege to come from a family like mine because all the people who make it up are talented - said the young actress - I learned a lot about history, theater, music. But being part of this family also has its own scary aspects: for a long time I didn't want to act so as not to be compared to my family. I hid, I didn't want to try to be an actress to avoid comparisons. But then I said yes to Clarence and found that I like doing it , it's so much fun and I'm lucky to have the support of my family."